Food banks are already worried about fall, winter — some families may not have turkeys this year

As food banks nationwide struggle with increased demand, inflationary pressures and other challenges, there is concern about fall and winter supplies; Fox News Digital spoke to Feeding America. 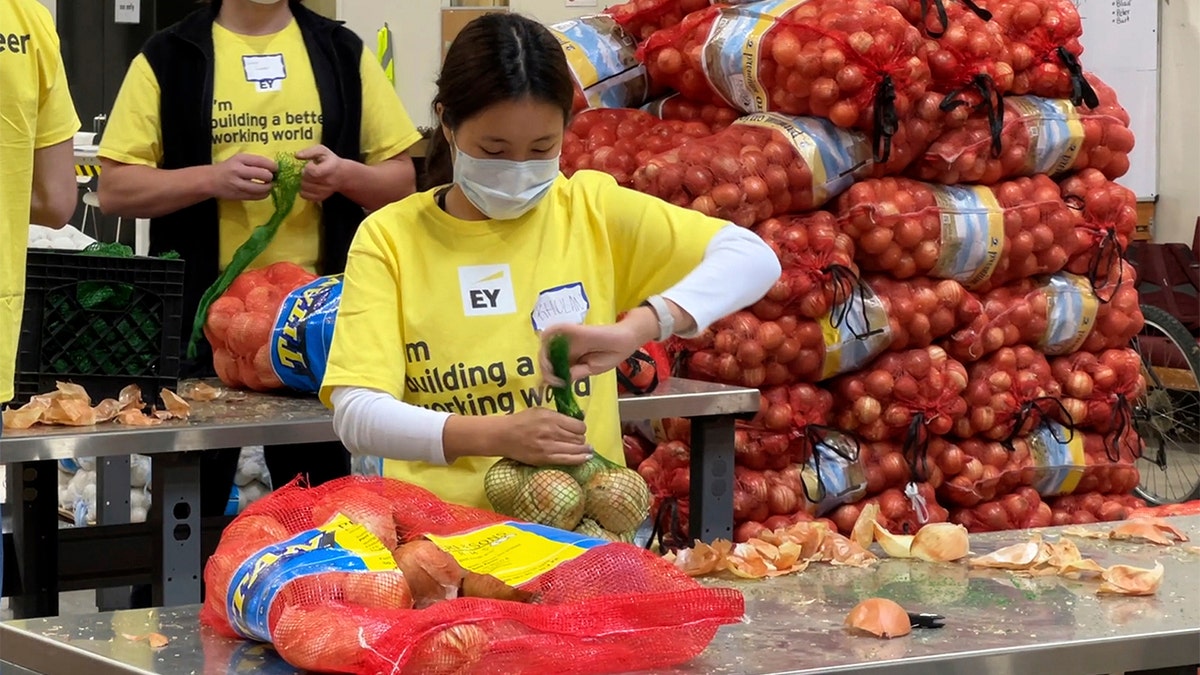 The food crisis in America today is very real — and not limited to specific parts of the country or certain segments of society.

There is also concern right now about what lies ahead in terms of the fall and winter seasons.

Fox News Digital spoke to Katie Fitzgerald, president and COO of Feeding America, on Friday by phone to discuss what the organization is seeing — and she described "a perfect storm" of situations that are making things extremely challenging in terms of meeting the demands of the food insecure in this country.

"The crisis that we're seeing right now is, in our judgment, in some ways worse than what we saw at the height of the pandemic," Fitzgerald said in the phone interview.

FOOD BANKS IN AMERICA EXPERIENCE SURGING DEMAND: ‘NO SIGN OF IT SLOWING DOWN ANY TIME SOON’

Today, "it's driven largely by inflationary pressures," she said. "We don't see the root causes in terms of food insecurity [being] the same as when the economy essentially was shut down [amid the COVID pandemic] — that was more driven by people losing their income."

Instead, right now, "it's simply that people are having to make economic tradeoffs. And what they're having to cut is their food, when everything's so much more expensive."

"The reason it's worse in some ways, in our point of view," she added, "is that the corollary supports that helped us get us through the surge in food insecurity during the pandemic are really not available to us. And the food banks are dealing with this inflation."

"Food donations are down — and that is because of the ongoing tightness in inventory and the ongoing supply chain challenges that are driven by a variety of forces."

"The third problem is that food banks have been essentially purchasing their way through this problem. And the value of their dollar is just as challenged for you and I when we go to the grocery store," she said.

Fitzgerald said that "70 percent of [the food banks] recently told us they're planning to purchase more food than last year — but the cost of that food is about 30-40% greater" than before this period of very high inflation, she said.

"People know that the resource [of a food bank] is available to them, and they're taking advantage of it" — that's "the good news," she said.

However, "we're seeing more demand — and the food banks are really struggling with those inflationary pressures to meet that demand."

She provided a deeper dive into government commodity food. "A program called the Emergency Food Assistance program is operated by the USDA, and that program basically purchases food from the private sector and makes it available to the charitable food system in the U.S., through the USDA."

"Feeding America food banks manage the vast majority of those contracts throughout the states," she said.

"During the height of the pandemic — when food insecurity was really high — there was a lot more of that food in the system because there were a couple of other programs in place," she said.

"There was a trade mitigation program. There was also the coronavirus food assistance program (CFAP) — the boxes program." As a result, the food banks system was "benefiting from a lot of commodity food being available through that variety of programs."

Trade mitigation and the CFAP program have since gone away, she said. So "food banks are dealing with a 30% decline or so in available food that they can bring as a solution to their local communities."

"It's sort of another part of this perfect storm, where they can't get as much for their money when they buy food — and assistance from the private sector is down. And commodity food is down about 30% down."

Here are additional points revealed about food banks right now during Fox News Digital's interview with the Feeding America president — and why they group is concerned about the fall and winter to come.

"I would say it's been pretty universal," said Fitzgerald. "These forces are just sort of at play everywhere."

"We do have disparities across the nation in terms of food insecurity that existed before this inflation period began [and] before the pandemic," she said.

She said that there are "higher rates of food insecurity in the Deep South — in the mid-South Delta Region — and that has remained the same."

She also said, "The one interesting and disturbing thing that we've seen is that racial disparities in food security and geographic disparities have worsened."

She said the organization has been working hard "to address these issues as a network to make sure that everyone has access to nutritious food."

"There are all different types of distribution methods out there — everything from drive-throughs to a very common model that we call the client choice, which is a lot like a retail experience," said Fitzgerald.

"It's a market experience for people to go through with a grocery cart and choose their own food."

"There's also the farmer's market models, plus an ‘order ahead’ app, which people can use to order in advance."

She said the drive-through models existed before the pandemic "but were far less common," she said. "They were [used] more around the holidays, when we were distributing a big Thanksgiving dinner for folks" and the like.

"The reason they became so common during the pandemic was twofold," she said. "One is, it was a no-contact, low-contact method to get food to people."

Second, she said, "was just the sheer numbers [at work]. How do you get that much food to people?"

She said that the Feeding America network of food banks have found "that some people prefer that. As you know, people have some shame and there is a stigma around needing to get this help. So, it can be the most comfortable way for people to get help because it's just more anonymous for them."

She added that food banks have continued to learn from the experiences of different food distribution methods.

"Having said that, one of the downsides with those drive-through methods — we know that nobody wants to have to sit in a car and wait for a long time. That's not a great experience for some people, especially with gas costing as much as it does now."

Food banks have been very thoughtful about the variety of methods used, she said, as they aim to make it as comfortable and as efficient as possible.

"Yes, we really are," Fitzgerald replied in answer to the question, "Have you seen a drop in donations?"

"The one channel that continues to be operating fairly flatly is our retail channel. We have relationships with retailers all across the country. Our food banks, our food pantries, pick up their surplus food from local Walmarts, Krogers, Stop & Shops, you name it," she said.

So that channel, that area, is "continuing to do pretty well," she said, and also noted, "We're working really hard to optimize those channels and relationships."

She said, "Manufacturing is down for us. So the donations that we get from manufacturers — with whom we have great relationships — their supply chains and their inventories are just so tight because consumer demand for grocery products is still so high."

"Those are the two main food donation channels" that they have, she said.

In terms of individual donations, Fitzgerald noted that "right now we're just not seeing as much, because people are struggling to buy their own groceries, let alone buy groceries [for others] and donate them."

"We're seeing that pressure from the supply chain and from inflation really tamping down on our food donations," she said.

Financial donations to local food banks are the "most effective way for people to help right now," said Fitzgerald.

"That's because purchasing food is how we're going to get the best progress on this issue, given the situation on food donations and commodities."

Noting that not everyone can do that, Fitzgerald said, "For those who can give a donation, that's very helpful. The food banks can purchase food wholesale, at much-reduced costs, that you or I can't do when we go to the grocery store."

"That's the most efficient way to help," she said.

"We ask people to think about the relationships that they have [in their lives]."

"If they work for food companies," for example, "or if they know or have contacts in the food industry," Fitzgerald said they might bring up the topic to others in the corporation, "to help people explore what can be done" to help — and to help drive people to FeedingAmerica.org.

"Even though our donations are down, we know that there are 66 billion pounds a year [of food] that go to waste each year. So there is opportunity there."

She also suggested that those who want to help "really just get active on the issue. Continue to raise awareness on social media. Help educate others — there are lots of ways to do that. Become a part of the movement to end hunger."

She said she believes it's a "solvable problem, from our point of view, but one that requires a variety of people to get involved."

"I wish I could say that we feel optimistic," said Fitzgerald.

"We're very worried that if we don't start to get relief in terms of the increased price of food and other costs in this country, it's going to be a very difficult fall and winter and holiday season."

She said there are food banks that would have already been purchasing turkeys by this point in time, but "turkeys are just cost-prohibitive now."

"They're already trying to source those products in anticipation of Thanksgiving," she said — "and having great difficulty in doing that right now."

"So they might have to give people chickens this year — they might not be able to give out other things."

"It's something we're really worried about in terms of the additional expenses that people will have this fall and winter, in terms of holidays, utilities" and much more, she said.

"We are working really hard as a network to get ready and anticipate that these will be the challenges we will have to overcome" this fall and winter, she said.

Feeding America began in 1979 as a clearinghouse for national food donations. It is today the nation’s largest domestic hunger-relief organization.

Kinzinger: Subpoenaing Trump, Pence not off the Table -- 'It Is Realistic'