Kirk Cameron, writer and father of six, has a new book for kids, "As You Grow," full of biblical wisdom. But he and Brave Books have not gotten a single "yes" from any public libraries for a story-hour program. 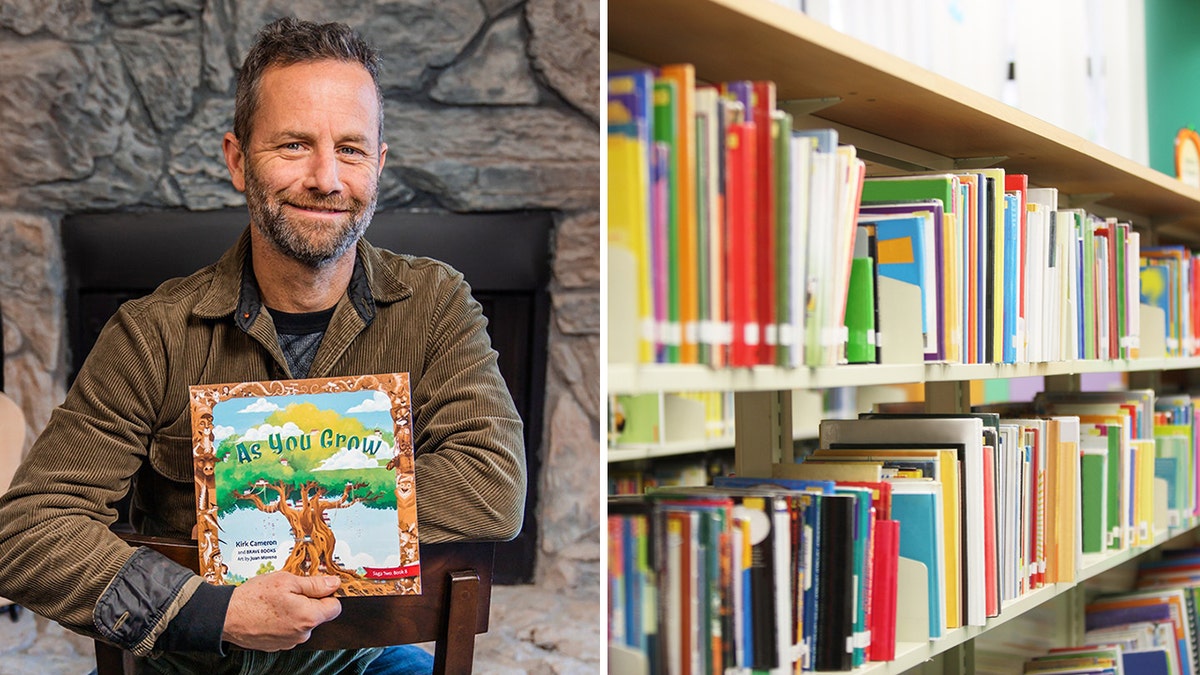 EXCLUSIVE: With a new children's book out that celebrates family, faith and biblical wisdom, actor-writer-producer Kirk Cameron cannot reach scores of American children or their families in many U.S. cities via the public library system because over 50 public libraries have either outright rejected him or not responded to requests on his behalf.

A story-hour program for kids and parents connected to new book releases is an activity that many libraries typically present to their patrons and communities.

Many of the same libraries that won't give Cameron a slot, however, are actively offering "drag queen" story hours or similar programs for kids and young people, according to Cameron's book publisher and according to a review of the libraries' websites and current program listings.

Some library programs promote gender fluidity, inclusion and diversity. Others offer "name change" clinics for older teens and adults who want to alter their official paperwork for gender-identity reasons.

Brave Books, Cameron's publisher, shared details of the story-hour requests — and the rejections received to date — with Fox News Digital exclusively this week.

The Rochambeau Public Library in Providence, Rhode Island, for instance, told Cameron and his book publisher by phone, "No, we will pass on having you run a program in our space."

"We are a very queer-friendly library. Our messaging does not align," the library worker also told Brave Books.

When the publisher asked the library official about filling out the proper form to apply for a story hour slot, the individual replied, "You can fill out the form to reserve space, to run the program in our space — but we won’t run your program."

It is a "club and safe space where teens can learn, discuss and connect over queer history, art, community resources, and more," the listing spells out.

It's "open to all members of the LGBTQ+ community who are 12+," the library's website listing also notes.

Fox News Digital reached out to the Rochambeau Public Library. An official first responded, "No comment," then added that the media query would be passed along to a supervisor.

Brave Books, as part of its extensive outreach to libraries for Kirk Cameron's new book, also contacted the City Heights/Weingart Branch Library in San Diego, California, hoping to be able to schedule Cameron for a story-hour program.

The publisher explained that this would be for "Kirk Cameron and his new children's book ‘As You Grow.’"

But the library representative told Cameron's publisher, "I don’t think that’s something that we would do."

The library employee added, "Because of how diverse our community is, I don’t know how many people you would get."

Yet the same San Diego Library system actively hosts a number of "LGBTQIA events" that go beyond Pride Month, it notes on its website.

The library system "collaborates" with other organizations to provide resources. It also hosts a teen queer book club, its website says.

"Telling our stories, highlighting the rich diversity … Those themes that are so important of love, acceptance and inclusion and seeing yourself represented in the books that are reading," a library official said, according to the library's website.

Fox News Digital reached out to this library for comment, but as of publication time did not hear back.

Cameron's book publisher also contacted the Alameda County Library system in California by phone and by email — and discussed its San Lorenzo location as a potential venue for a story presentation.

A children's library representative at the San Lorenzo location told Cameron's publisher by phone, "You know, I’m really sorry, but we are not interested," Brave Books shared with Fox News Digital.

The San Lorenzo Library, however, hosted a "get free help" clinic this month with Bay Area Legal Aid attorneys and volunteers for those interested in "completing name and gender marker change court paperwork and updating identity documents such as CA birth certificates, driver’s licenses/ IDs, passports and Social Security cards," the library notes on its website.

The event, as the library writes on its site, "is part of our ‘Every Month Is Pride Month Series.’"

Fox News Digital reached out to the library for comment. A county librarian said the larger library system posed a series of questions to Cameron's publisher via email, as is typical, the librarian said.

"We receive many requests from authors to hold book promotion events at the library," the librarian said.

"For those we respond to, we typically ask [certain] questions [about format, cost, etc.]. We have every intention of getting back" to the publisher, the representative added in her email.

However, Brave Books told Fox News Digital it promptly responded to those questions from the library questions and then called the library to follow up — and that's when it received the "No, we are not interested" comment by phone.

The library employee was not encouraging, saying the library has "a strategic plan in place."

The individual added, "Generally when we have author visits, those are coordinated through our departments. We really have a push. We have a strategic plan in place, so we are really looking at authors who are diverse. Authors of color. That’s really been our focus."

When Brave Books pointed out that Cameron's book contributes in its own way to a diverse collection of ideas, beliefs and stories, the library representative replied, "Well, we are focusing on racial equity."

Fox News Digital reached out to the library for comment; the library indicated a response might be forthcoming, but as of publication it has not replied.

CLASSIC CHILDREN'S BOOK QUIZ: HOW WELL DO YOU KNOW THE REAL STORY OF THESE BOOKS?

In yet another library outreach effort, Brave Books tried the public library in Scarsdale, New York.

A representative said, "Thank you for thinking of us, but we are not interested in this program," the publisher shared.

Reacting to the news that he has yet to be booked into a single children's story hour at a public library in America for his new book — and commenting on the rejections and comments he's received — Cameron told Fox News Digital, "This is proof that more than ever, we are getting destroyed in the battle for the hearts and minds of our children."

Cameron also said, "Publicly funded libraries are green-lighting ‘gender marker and name change clinics’ while denying a story time that would involve the reading of a book that teaches biblical wisdom. How much more clear can it get?"

He added, "We have to start fighting back, or we will lose our kids and this country."

Both he and Brave Books are announcing to the public, he said, that "for every purchase made at bravebooks.us, we will donate a book to a library near you from our Freedom Island [children's book] series that teaches pro-God and pro-family values."

Trent Talbot, founder and CEO of the Texas-based Brave Books, said in a statement to Fox News Digital, "It is devastating to discover that many of our publicly funded libraries have now become indoctrination centers that refuse to allow biblical wisdom to be taught to our children."

He added, "The woke left understands that morality is instilled by the age of 10, and they want their morality to win, not the morality that the Bible teaches."

BIBLE VERSE OF THE DAY: WE'RE MADE FOR MUCH MORE THAN JUST ‘CONFORMING’ TO THIS WORLD

Brave Books told Fox News Digital on Tuesday, "All of the libraries that we have contacted [about possible story hours or book programs for Kirk Cameron] have hosted LGBTQ+ story times with drag queens in the past."

The company added, "We have not been approved for a single book reading of ‘As You Grow’ from any library yet."

Cameron is the married father of six children, four of whom are adopted.

The new book, "As You Grow," is "part of a whole universe of books, with a whole series of characters," he told Fox News Digital recently in an interview.

"It teaches biblical wisdom and the value of producing the fruit of the spirit: love, joy, peace, patience, kindness, goodness, gentleness, faithfulness, self-control."

As for how public libraries are funded: Local governments fund an overwhelming majority of them.

Only a small fraction of public library funding comes from donations, grants and federal funding.

The proportions of library funding depend "on where the library is located," according to LanguageHumanities.org.

"In general," it says, "the municipality provides the greatest percentage of funding for public libraries — often at least half, if not more. These funds are gathered from local taxes, library fines, parking tickets and other tools used to generate revenue for a city or town."

The local funding that libraries receive represents a very small portion of city/local legislature budgets. (New York City, for example, spends less than 1% of its budget on library funding.)

The state with the highest per capita amount, New York, spent about $69 per capita in 2018 — while the lowest, Mississippi, spent $16.42, according to the American Academy of Arts & Sciences.

As of 2019, there were approximately 9,000 public libraries in the U.S., according to the American Library Association. That data comes from the Public Libraries Survey, conducted every year by the Institute of Museum and Library Services.

Meanwhile, Kirk Cameron and his book publisher said they will not give up their efforts to secure story-hour programs for kids in public libraries across America.

Gabby Petito's mom reveals 'We didn't know that Brian was who he was' ...

Great gardening tips: How to save fruit and vegetable seeds for next y...